The purpose of the preliminary engineering and environmental work being completed for the Eastern Corridor Program is to evaluate the Program’s impacts to the man-made and natural environment, as required under the 1969 National Environmental Policy Act (NEPA). At the start of the evaluation process, it was agreed amongst the federal and state resource agencies that a tiered Environmental Impact Statement (EIS) approach would be used to address the complex issues of the Eastern Corridor.

A Tier 1 EIS would address the range of actions within the full multi-modal plan and provide a conservative assessment of impacts related to decision-making under NEPA. Then, separate Tier 2 NEPA documents, which examines the projects and their impacts in much deeper detail, will be prepared (and descisions made) for each of the core Eastern Corridor projects, consistent with the template established under the Tier 1 EIS.

More detailed information about the Tier 1 alternatives evaluation and recommendations can be found in the Eastern Corridor Tier 1 Draft EIS  and Tier 1 Final EIS. 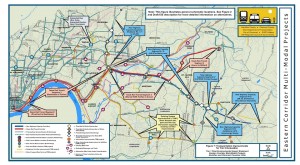 Tier 2 work for the Eastern Corridor involves further analysis and development of the Program’s four core projects: Red Bank Corridor (Segment I); Red Bank to I-275/SR 32 (Segment II and III); Eastgate Area to Batavia (Segment IV and IVa); and Oasis Rail Transit. Recommendations made in Tier 1 are being examined in much more detail and evaluated for impact, function, context, constructability and affordability. Preliminary alternatives will be narrowed and refined, and the study will conclude by identifying preferred alternatives for the four projects to eventually undergo detailed design and construction.